A shiver runs through my body.  Perhaps it’s the cold drops of rain hitting my exposed torso.  It might be a remnant of fatigue from the 4:30 AM wake up call.  Most likely is expectant excitement, with a dash of fear.  It’s not every day that you get to swim with whale sharks.

Harry, Dad and I are sitting in a narrow canoe, gliding our way towards a cacophony of boats, swimmers and commotion ahead.  There are only a few places in the world where you can see whale sharks, and we’ve traveled a long way to come here to the Philippines.  Wearing only swim trunks, fins and mask, I slip my feet over the side, hoist myself up, and slide into the warm waves.

The grey world above gives way to the bright, sonorous beat of the ocean below.  Immediately, before my eyes even have time to focus, I see one, right in front of me.  A massive, spotted, speckled whale shark.  And holy shit, that’s one big fish.

Twelve, fifteen, eighteen, twenty feet in length, I remember with a jolt that these boys are just pups.  Whale sharks, or filter-feeding carpet sharks, are the largest known living fish species on earth.  The larger recorded specimens measure over 40 feet in length and weigh in excess of 60,000 pounds (for reference, a full-sized school bus loaded eager students might weigh around 30,000 pounds).

Despite their massive size, these sharks are gentle giants.  Thank you to Mr. Spielberg, most people born in the last half century harbor a knee-jerk association of terror with the word shark.  However, while swimming alongside a half a dozen of them, I can’t help but appreciate their docile nature, their slow, graceful movements, and their silly, almost fat-kid attitude towards food.

Harry, Dad and I dive down over and over again, looking at the sharks, taking pictures, and enjoying the moments.  The locals who manage the tourist site gave strict instructions not to touch, or get too close to the sharks.  However, just because you’re not supposed to get close to the sharks doesn’t mean that the sharks aren’t supposed to get close to you.  While watching one shark slowly move past, I get a renewed six sense-like shiver of excitement.   Turning around, I see a shark coming straight at me, mouth gaping wide.

Fortunately, there is no multitude of razor teeth, no black death mode of rolling eyes.  These guys are friendly, almost playful.  On the two-hour ride back to our hotel, I’m still thinking about their huge bodies, gaping mouths, and small fish eyes.  I’m not sure why, but I’m reminded of gigantic, majestic, Jurassic tadpoles.  It’s truly a once in a lifetime experience. 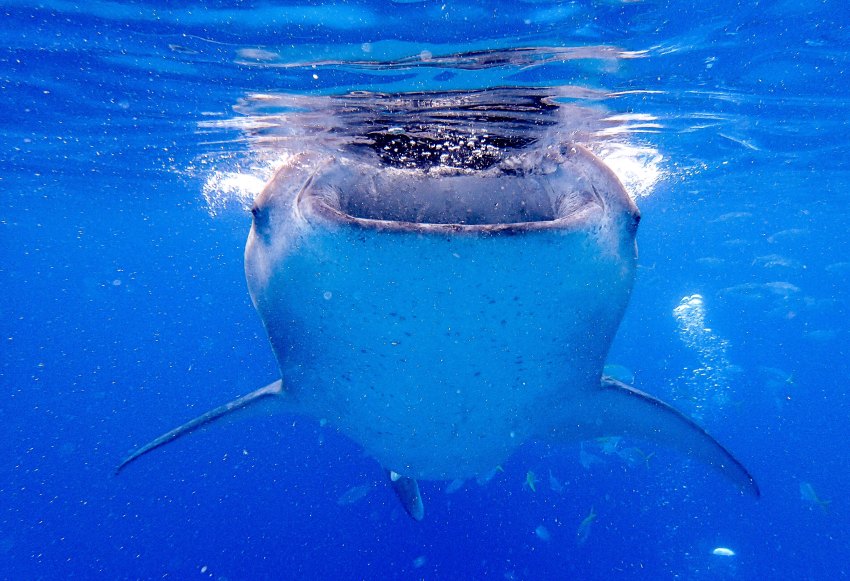 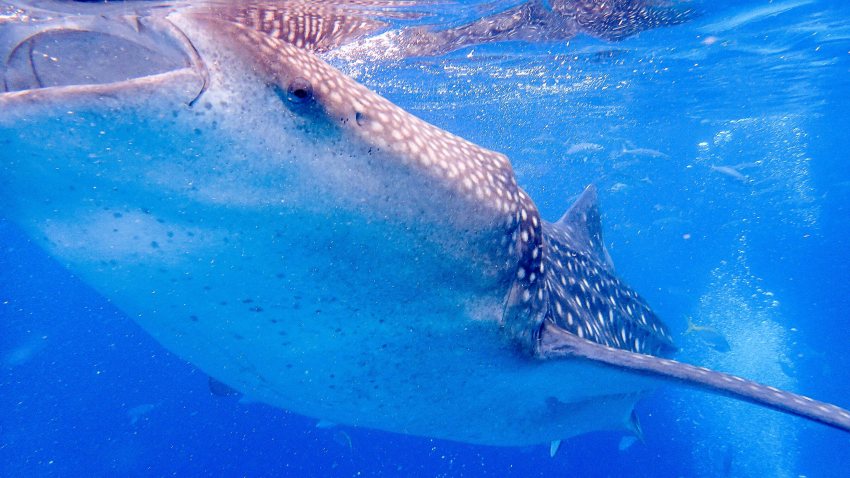 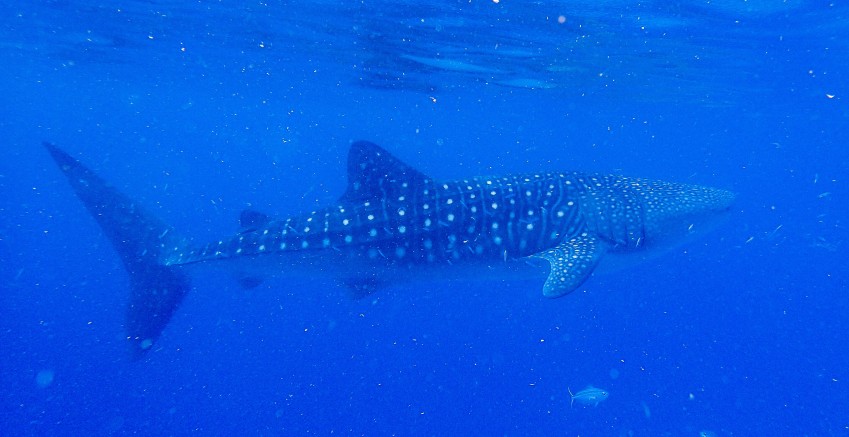 For the majority of my trip, I’ve used accommodations that fall with the realm of my $100 per day travel budget.  While Airbnb arguably holds the number one spot, I’ve also stayed in hotels, bed and breakfasts, homestays, and the occasional hostel.  Most places are comfortable and adequate, but not luxurious.  With Harry and Dad joining the adventure, we decided to upgrade our last stay to Huma Resort–a hotel that boasts its own entire island.

It’s 7:30 PM, and we’ve had a long day of travel.  Harry, Dad and I started the morning in Dumaguete, Negros, and arrived twelve hours later on Huma Island after two bus rides, a packed airport transfer, two (painfully delayed) flights, and a choppy, salty ocean ferry.

Side note: Generally, travel is wonderful, but sometimes it is a pain in the ass.  Of our five flights with Philippine Airlines, two were delayed, one was so delayed that the airlines had to find a new plane, and the last one never showed up.

To say the least, Harry, Dad and I are happy that the long day is over, and look forward to a few days of island living.   Reception greets us warmly, and before we know it we are being golf-carted to our bungalows, built above the water.

Having eaten nothing but snacks and airport fare, we freshen up and head to the other side of the island for a Filipino Barbecue, or the local special for the evening.  During the fifteen minute walk we notice that the sky is darkening from more than just the set sun–those are mighty dark clouds above.

Right outside the restaurant (located over the water, at the end of a long pier), the first drops of rain begin to fall.  Not so distant, thunder flashes ominously and the heavens begin to rumble.

A beehive of activity greets us upon walking through the front door.  Tables are haphazardly placed, chairs sit in disarray, people scramble, and confusion reigns.  Finally one of the waiters seats us at a table, and apologetically explains that the entire barbecue, along with tables, plates, buffet-style trays–the entire shabang–was all set up elegantly outside.  Due to the unexpected storm, everyone is scrambling to move the entire production back under cover.

And, not a moment too soon!  The drizzle gives way to a torrent, and the heavens open their floodgates.  Lightning flashes bright outside, and thunder cracks and booms for what seems like minutes on end.  The poor staff are trying to protect the drenched, sizzling BBQ, and scrambling to get the last of the equipment under cover.

Harry, Dad and I, stiff and tired from our long day, stretch back in our chairs, and just watch the show.

Rain flows heavily down the straw roof outside, and lightning flashes through the windows.  Harry suddenly says,”Doesn’t this feel like the Tiki Room, in Disneyland?”

We are in the middle of the tropics, thousands of miles from home, hundreds of miles from the nearest city, with rain bucketing down and lightning flashes lighting up the dark windows.  The environment–though totally foreign–is oddly comfortable.  Dad and I both smile.