To a westerner, culinary experiences in Hong Kong can be quite overwhelming.

American palates tend to favor simple, easy-to-eat foods.  A breast of chicken.  A slab of beef.  A boneless filet of fish.  A cleanly presented hamburger, or a BLT with a dainty toothpick holding everything together.

Dishes in Hong Kong range from normal to exotic to downright bizarre.  Through a combination of waste avoidance and broader taste preference, most meat dishes include parts of animals that Americans usually prefer to ignore.

In addition to breasts, thighs, and legs, Hong Kong chicken dishes include bones, chopped together with each piece.  Each bite must be taken with caution, because inside lurk a myriad of bones and tricky inedible pieces that will leave a novice diner tooth sore and stymied.

A favorite delicacy in China also includes chicken feet—complete with bones, cartilage, and gelatinous skin.  People jovially pop the entire foot into their mouth, and proceed to chew and maneuver until nothing remains except a small pile of knuckle bones on the plate.

Fish is nearly always served whole, and with deft skill people navigate the countless spines and small bones.  Usually no piece goes to waste.  One time, while I watched Karrmen’s great-uncle pull apart the steaming innards of a fish head, Karrmen snuck in to steal the most tender part of the fish—a medallion of meat next to the cheek bone.  Karrmen offered it to me, and you know what, pretty good!  I like to try everything, at least once.

Depending on the occasion and the crowd, imbibement of alcohol usually goes hand in hand with large meals.  And thank the heavens for the preemptive education my liver received in college—the drinking is long and heavy!

One evening we go out to dinner with Karrmen’s mother and 8 or 9 of Karrmen’s “Aunties” and “Uncles.”  Each couple brings a few bottles of their favorite alcohols, and tonight people are out for blood.

“It’s a marathon, not a sprint,” Karrmen murmurs as her uncle pours another round of sake shots, the fifth in just about as many minutes.

The evening starts with a bottle of Laphroaig whisky (smoke and peat, masterfully distilled into a delicious but deadly Scottish slap to the face), followed by first-class sake, then beer, then soju (Korean alcohol), then soju in beer, then white wine, then desert wine, then finish off the last off the Laphroaig.

Sometimes, especially in distant lands, you need to just run with the punches.

During a different family dinner, somewhere between a tumbler of scotch and a glass of fermented wine, a roasted dish comes out of the kitchen.  As the circular lazy suzan brings the dish around, I reach out and grab a piece with my chopsticks that looks both appetizing and safe—a crispy leg.

Around my second or third crunchy bite (the meat is a tad tough, but tasty), I notice that the Cantonese conversation around me has faltered, and everyone is looking at me.  Expressions are amused, but impressed.  Karrmen says something to everyone in Cantonese and then turns to me.

In that split second, before she even says anything, I realize what had happened.

“Sweetheart, you know what that part you are eating is, right?  It’s, it’s not the leg…it’s half of the duck’s head.”

Everyone is watching, the silence hanging heavily in the air.

My inwardly reeling mind stalls for a split second.

“Of course,” I respond, catching the beat.

And with that I take another crispy bite, amid cheers and appreciative laughter. 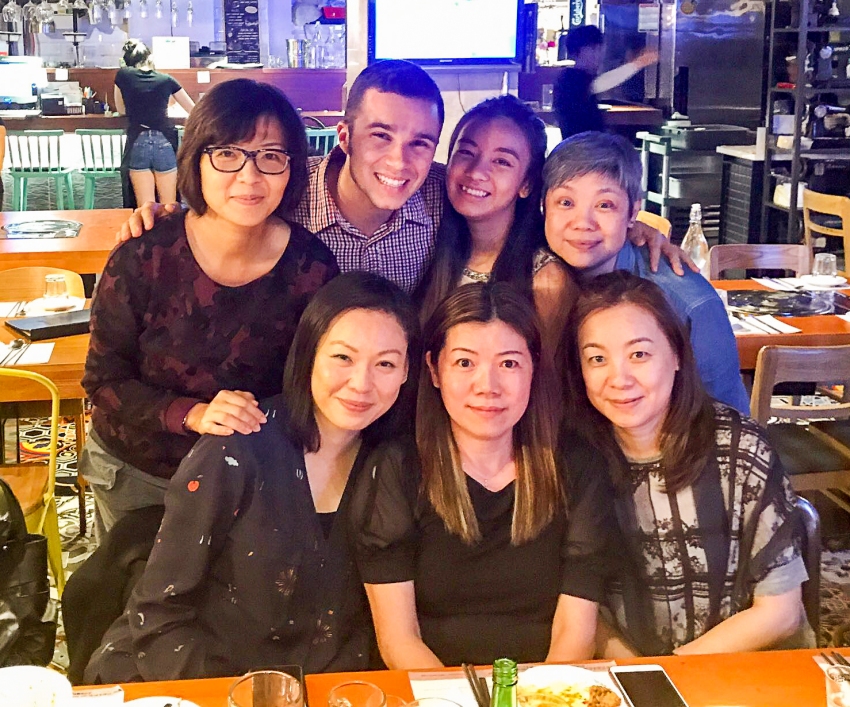 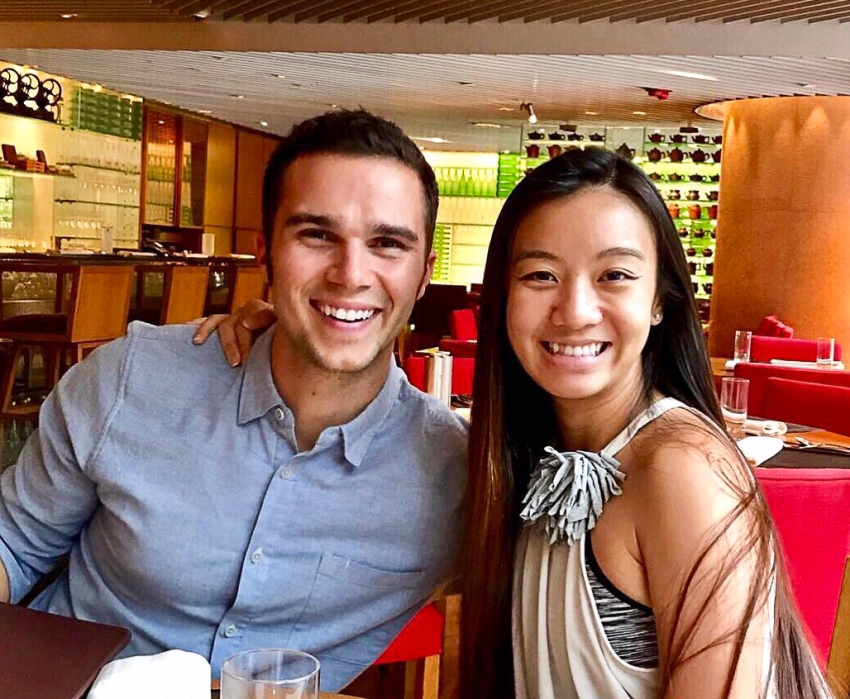 In my travels, I’ve noticed that many cultures enjoy gambling in the form of a game.  In America, friends often gather to play poker.  In Italy, I spent hours playing Briscola—an ancient card game—with friends and family.  In Hong Kong (and many other parts of Asia), the game is Mahjong.

Mahjong is played with four players, two dice, and one hundred forty-four thick domino-like pieces, each containing a specific suit, value and meaning.

The object of the game is to obtain a “Mahjong,” or a complete hand that contains various combinations of the different tiles.  The game moves quite quickly, as each time someone obtains a Mahjong—usually after five to fifteen minutes of playing—a new round begins.

Like many games that foster intelligence, social interaction, and the chance to win a bit of money, Mahjong is popular with the older folks.  Karrmen’s grandma, a renown, respectable Mahjong player, has gathered with friends and relatives for decades to play.

One afternoon at Karrmen’s Hong Kong apartment, the Mahjong set comes out.  Things get real.  Three generations of Hong Kong women, Karrmen, her mother and her grandmother, teach and play against me, a clever but totally clueless Californian.

The game, especially for beginners, requires intense concentration.  To successfully battle, one needs to constantly calculate odds, think and rethink.  One needs to formulate a plan, but keep the plan flexible.  One needs to balance luck and skill.  And, while doing all this, one needs to memorize the ancient Chinese characters for 1 through 9, which look completely foreign from their western counterparts.

Despite the complexity, I eventually catch on, and begin to blunder my way through a number of victories.  On one occasion, I “steal” a key piece from right under Grandma’s nose.  To her indignation and chagrin I proceed to win the round with a low score.

Note:  Each win comes with a corresponding score between 1 and 10 points, depending on the complexity of the winning hand.  The more points, the more masterful the hand, the more money won.  Anytime someone won with a 1 or 2 or 3-point hand, Grandma would chuckle and shout, “No Ambition!”

In any case, when I obliviously stole the winning piece of her surely 8 or 9 point hand to win with a 3 point hand, she was less than pleased.

“Even a blind cat can find a dead mouse once in a while!”

The following day Karrmen’s extended family comes to visit, and, aside from eating, we play Mahjong all day long.  Money merrily changes hands, people chat, socialize, and catch up all while the game continues, hour after hour.

After the extended family departs, the original foursome looks up at the clock and realizes with a surprise that it’s almost midnight.  Tempus Fugit!  I had done reasonably well—amassed a small wad of small Hong Kong bills—and had even managed to pull off a few 7 & 8 point victories.

On the last hand before calling it quits, I notice that I am dealt a hodgepodge of different suits and sequences.  After a round or two, I realize—Mahjong!  But, since the hand was so poor, the win would only come with one, or maybe two points.  Or, in Grandma lingo, a “Chickenshit Win.”

Still a beginner, and a guest, I consult the table.  Karrmen explains, you can win the hand, but it’s a crummy win.  The alternative, and implied better option, is to keep playing in the hope to obtain a better hand.  I consider.  Then I think about the bigger picture.  Grandma eyes me up.

“No, let’s keep playing.” I decide, pounding my fist on the table.  “I have ambition!”

Everyone laughs, and we keep playing.  Of course, Grandma had been crafting a master hand, and, shortly after I renounce my Chickenshit victory, she steals one of my discarded tiles for a grand 9-point (almost perfect) victory.

She laughs so hard that Karrmen says she almost peed.

Sometimes, it is necessary to lose in order to win. 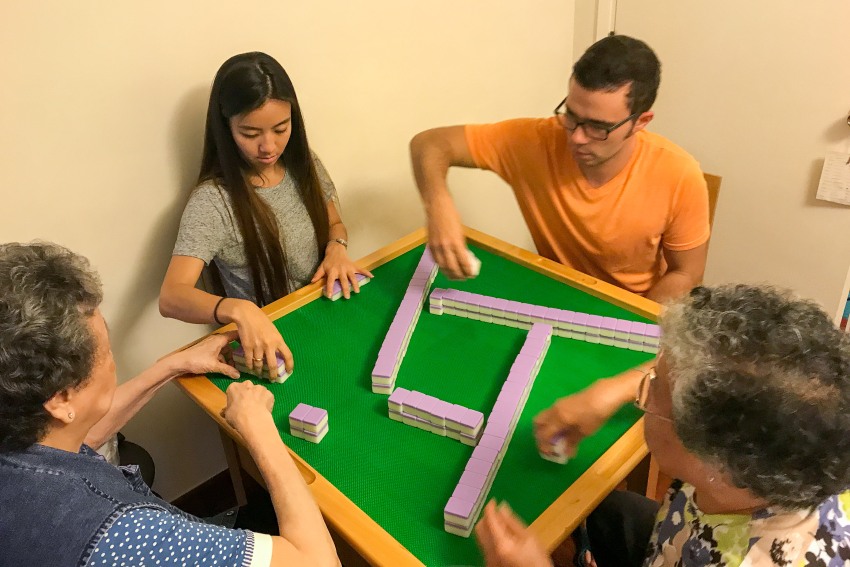 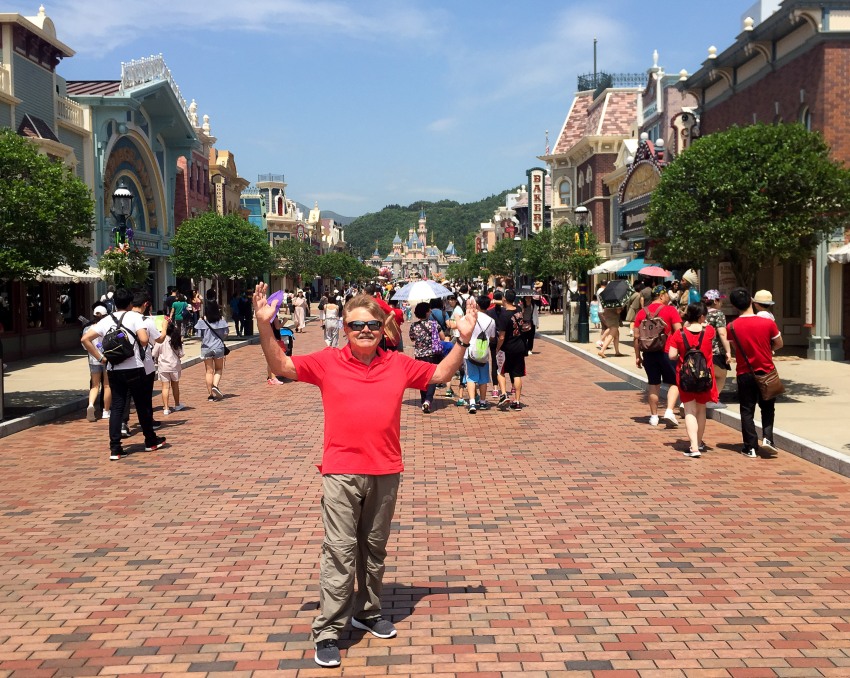 The prospect of Disneyland always evokes a strong sense of excitement within the Elliott clan.  My father, perhaps the most enthusiastic Disney fan of the bunch, often talks about visiting the original Anaheim park as a kid mere days after its opening.

When my father and brother Harry decided to come and visit and spend a few days in Hong Kong, Karrmen and I brainstormed activities.  With a hundred different potential options, one was certain:  Hong Kong Disneyland.

Any morning wakeup call with the prospect of a Disney park adventure comes with a dull, suppressed little bubble of childhood excitement.  The morning rays of sunshine are a bit crisper, the nighttime fatigue shakes off a bit faster, and the clock seems to march to a double beat.

After 45 minutes of Hong Kong metro travel, we transfer to the last station before the Hong Kong Disney park.  The train windows are shaped like Micky heads, the walls memorialize Walt Disney classic photos, and the speakers chime familiar tunes.  Before we know it, we’re in the park!

The monorail, main street, marching bands, lion king music, and smiles all around.

The rides and fun continue, interrupted only by a lunch stop.  Classic to Disney’s enthusiasm for different world cultures, one restaurant features foods from half a dozen different world regions.  What’s more, the restaurant also provides different rooms to sit and eat, each one festooned in the respective style of each culture.  We sit in the “China” room (when in Rome), but that didn’t stop us from exploring India, Russia, Morocco and Egypt.

A few vertical roller-coaster pendulums help battle the post-lunch afternoon fatigue, and prepare us for an exploration of Tom Sawyer’s Island (Or, nowadays Tarzan’s tree house).  We wind the afternoon up with a classic spin around It’s a Small World, followed by the sleepy, contented penguin amble up Main Street towards the inevitable exit.

Obviously, the clientele in Hong Kong differs from that in California.  However, I was struck by how closely the Hong Kong park follows the original Anaheim Disney lay-out, and how, at any given moment, one might completely forget that they are in a different part of the world.

But, if you ever visit, and forget that you are in Asia, just look to the concession stands for clues:  the grilled squid, casually in place of hot dogs, is a dead give-away. 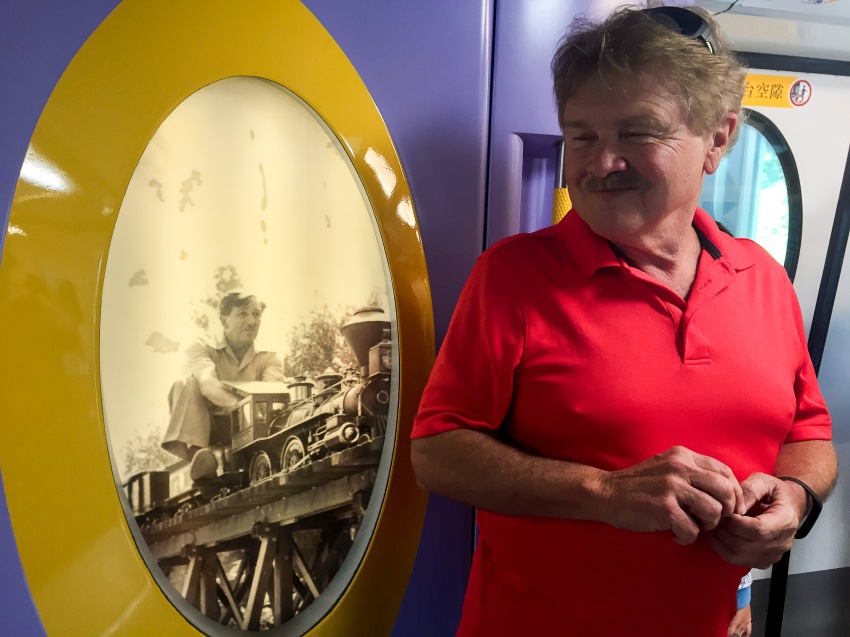 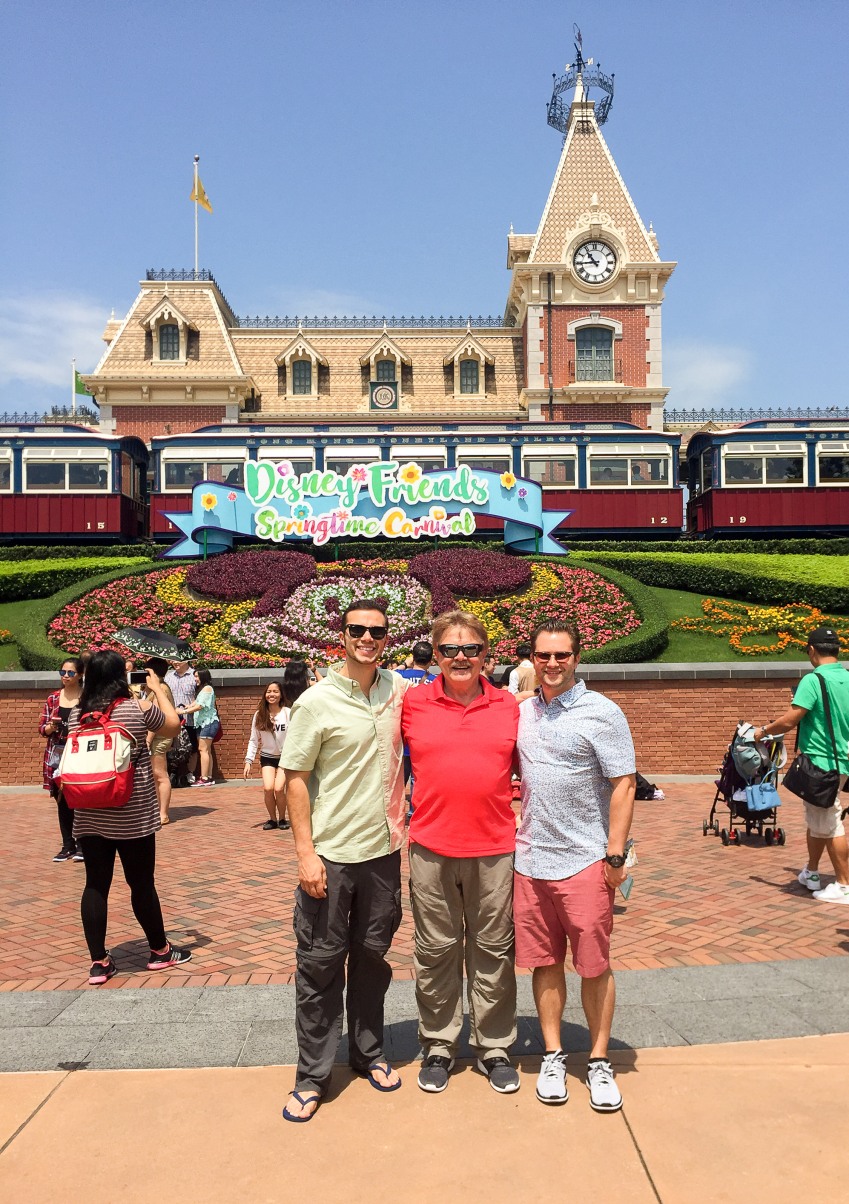 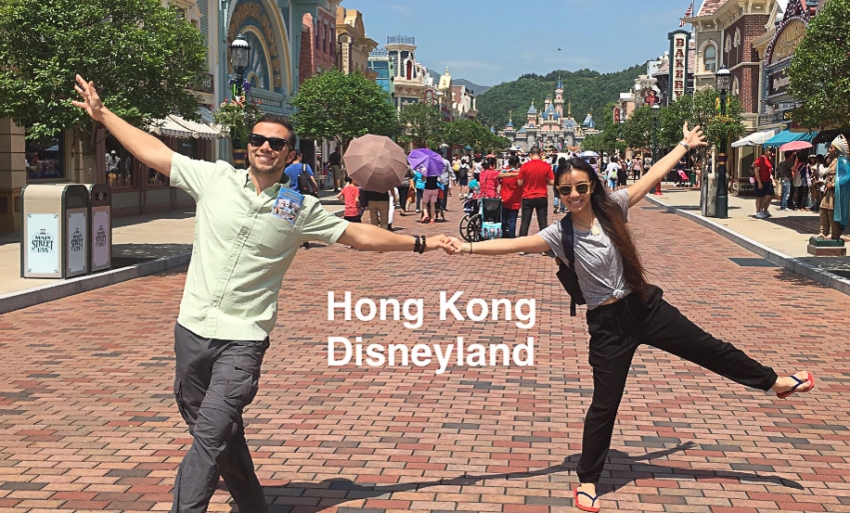