Odd hobbies, tastes and interests make up many of the small pleasures in life.  Over the years, interests spark and flicker, float in and out of the window.  Some that you pick up, you later decide to put back down.  Others you continue to carry, happily entwined into the fabric of your life.

Traveling through Italy these past weeks has brought back, like the greeting of old friends, a flush of fun and familiar interests.

Amongst the company of good-hearted people, I am eating wonderful food, drinking delicate spirits, and enjoying some of the more simple pleasures in life. 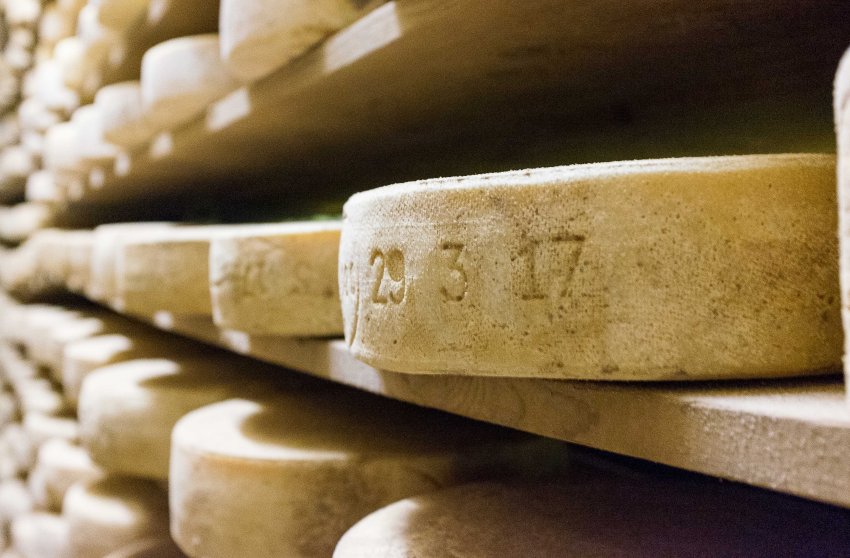 The 5:00 AM alarm rings groggily in the pre-dawn darkness.  Why am I waking up at this hour again?  Ah yes, I remember now.  We’re going on an adventure, a field trip.  There’s always a small magic associated with early-morning, out of the ordinary excursions.

My good friend Diego and I get in the car, and I roll the window down to wake up my sleeping mind.  The crisp breeze helps.

Within minutes we pull up to a deceptively small building, settled in a wide valley surrounded by the beautiful dolomite mountains of northern Italy.  The smell of fresh milk and cheese, along with the owner of the establishment, meet us at the door.  We are at the Latteria di Camolino, the largest artisanal cheese producer in the Bellunese valley.  And, thank’s to Diego’s kind nature and big smile, we’ve scored a personal tour of the factory, and an up-front look at how the different sorts of cheese are created.

Milk products are fundamental pillars of the Italian culinary tradition.  Parmesan  cheese, for example, can be traced back to the middle ages, and was likely produced far earlier.  Although modern companies use stainless steel, sophisticated electronics and temperature controlled spaces, the fundamental production process of a wheel today are similar to those produced 600 years ago.

The owner leads us into the back of the building, where all the magic happens.  Diego and I dawn white, sterile boots along with matching white outfits.  Out back, a truck arrives, fresh with the morning milk of a hundred local cows.

Over the next few hours, we happily watch the entire process of making half a dozen types of cheese, from fresh milk to Casel or Stracchino or Schiz or Ricotta.  Once the truck is unloaded, the milk is mixed, heated, cooled, drained, strained, squished, salted, and packaged.

For such a large production, Diego and I are surprised to find that only two workers are necessary to run the daily processes.  The workers are friendly and jovial, explaining the surprisingly manual process and giving us tastes of the fresh cheese at various stages of production.

At a certain point Diego mentions that we ate their cheese during dinner the previous evening, and one of the workers, amid his bustle, stops for a second, looks me straight in the eye, and asks me how I liked it.  Without a pause I shout “Ma veramente buono!”, thumbs up.  A totally genuine smile lights up his face for an instant, before turning back to the task at hand.

During a nine-o’clock break, complete with phenomenal mountain background panorama out the back door, we try yet more cheese.  One is a fresh variant, one is aged 6 months, and the third aged for 24 months.  Although all three are technically the same cheese, each one has its own character and flair.

While munching away, one of the workers asks me which one is my favorite.  I respond that they are all good.  But, if push comes to shove, the 24 month is the best.

Instead of pictures, here’s a video I’ve put together:

Ever since I arrived in the town of Siena, Tuscany for a two month intensive language course in 2009, I’ve been enamored by a capolavoro of Italian cuisine: Prosciutto.

Prosciutto, or the art of dry-curing ham, is a truly ancient tradition, pre-dating Roman times.

The word Prosciutto comes from Latin term Pro (in advance) Exsuctus (to extract {moisture}).  Prosciutto is created using the hind leg of a pig, and, once covered with salt and spices, the “coscia” is hung for months in a clean, dry space in order to naturally remove the moisture.  The general rule of thumb is one month of seasoning per kilo of weight.

Generally, prosciutto is purchased in smaller quantities at supermarkets, where commercial slicers quickly work to create thin, delicious slices ready for consumption.  Usually one will buy an etto (3.5 ounces) or two at a time, enough for a few sandwiches or a round of appetizers.

However, my heart and stomach aren’t fully satisfied by smaller quantities.  For years, I’ve dreamt of bulk prosciutto.  Once, in Siena, I tried to buy a kilo worth of sliced prosciutto (ten ettos, or roughly two pounds) at a local supermarket.  I failed, miserably.  The Italian woman behind the counter looked at me aghast, and, assuming I didn’t know what I was talking about, refused to slice more than a few ettos-worth.

Good-hearted Stefano finally relented, and took me to the right store to procure not just a few slices prosciutto, but the whole shebang, the real deal, the kit kat and kaboodle.   I bought an entire, bone-in, leg of Prosciutto di Parma.

And I’ll tell you what.  It is every bit as glorious as I thought it would be.

Of course, once you buy a 24 pound hunk of meat, you gotta do something with it.  Fortunately, I know a guy who knows a guy.

After Parma, I traveled to Padova, my old university stomping ground, and then to Belluno, where the family of my old roommates live.  A few days after arriving to Belluno, Andrea, the father of my roommates, took me to his friend for a very special, unique treat: de-boning and slicing the leg of prosciutto.

And so, with excitement in my heart and hunger in my stomach, I happily watched, and recorded the process of trimming, de-boning, and slicing.

Here’s another video, recording the process in full.  The subsequent days have seen much in the way of the delicious, thin-sliced meat.

Disclosure:  If you’re squeamish of stomach or don’t like seeing animal meat, might consider skipping this one.

Ten years ago in Italy, during my big sister’s wedding, I tried a strange, clear liquor for the first time.  The taste was strong: a mouth-scorching, throat-burning strong.  It was definitely hard alcohol, but it wasn’t all bad.  It was grappa.

I completely forgot about the potent stuff for two or three years until I returned for a year to study in Padova.  At the time I was lucky enough to meet wonderful Italian roommates, and, after some months, they invited me to their home in the Dolimite Mountains, on the Northern border of Italy, just south of the Austrian border.

Their parents, Donatella and Andrea, immediately treated my like another son, and made me feel at home.  Over the course of my first visit the father, Andrea, brought out a few bottles after dinner one evening.  He called the contents in the bottles Grappa, but each one had a different color and different taste.  While all were strong, to my surprise each one was subtle, delicate, different.

And so sparked my interest in Grappa.

Grappa, yet another ancient Italian ritual, was originally created as a poor man’s drink.  Instead of beer, or wine, or even whisky, which are all fermented specifically for the purpose of creating the finished product, Grappa originated as a way of capturing every drop of fermentable sugar left in empty grape skins after winemaking.

Grappa connoisseurs might espouse on the virtues and subtle differences between “pure” grappas, the clear a alcohol made with no other flavors except that of the grape skins.  I’m a bit more layman.  The pure, clear stuff till still tastes to me more or less like it did ten years ago: clear, harsh, somewhat tasty.  Alcohol.

However, Andrea, “il Maestro” di grappa, creates his own unique tastes.  Being a man of the mountains, a man who cuts his own wood for the winter, Andrea knows every herb, fruit, tree and salvatic plant within a hundred miles.  Each one has its own unique flavor, color and taste.  And it turns out, when you add a flavor, a fruit, an herb, and sugar, to a bottle of raw grappa, it changes.

The raw alcohol assumes the flavor of the new roommate, and together the combinations are endless.  My personal favorites include herbs: Rosmary, Basil, Thyme, Melissa.  But Andrea has also created grappa flavors with apples, oranges, cherries, watermelon seeds, peaches, pears, pine cones, raspberries, blackberries, and all other manner of items found nearby in nature.

The clear grappa serves as both a conduit to assume the particular flavors of a place, and also as a social lubricant to enjoy the unique flavors with others.

And so, returning to visit my roommate’s family after many years, I find that Andrea has not been idle in my absence, but has created dozens of new grappas–each one different, unique.  Each taste depends on the quality of the ingredient that year, the amount of time left under the sun, the age of the grappa (generally the longer left alone, the more refined the flavors become), and the mood of the people drinking.

Upon arrival, with so many grappas to try, I immediately began a running tally of our tastes in my moleskine, with scores, impressions, drawings and overall notes on each gusto.  Everyone pitched in, and we finally managed to document the different dozens of grappa Andrea has created over the years and decades.

While finishing the last of the different grappa flavors, and already talking about which fruits and new ideas to try for next time, I’m struck by a simple realization.  I like the grappa, sure.  Each one has its own taste, its own history, its own character.  But the grappa really isn’t the important part.

It’s the people around, the sharing of your life, the laughter and the joking, the serious words, the respect and pleasure of the company of others.  We are human, and whether it is Italian, American, familiar or foreign, it is a beautiful thing to spend time with those you love. 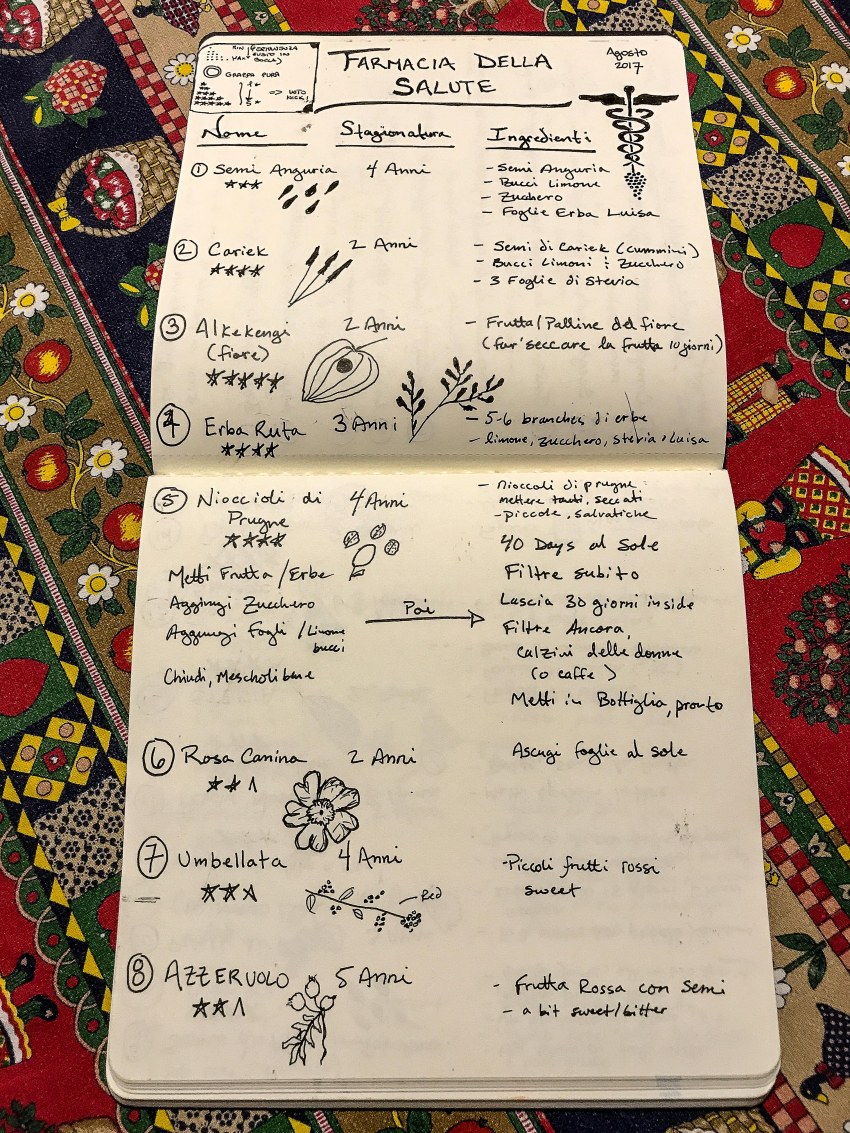 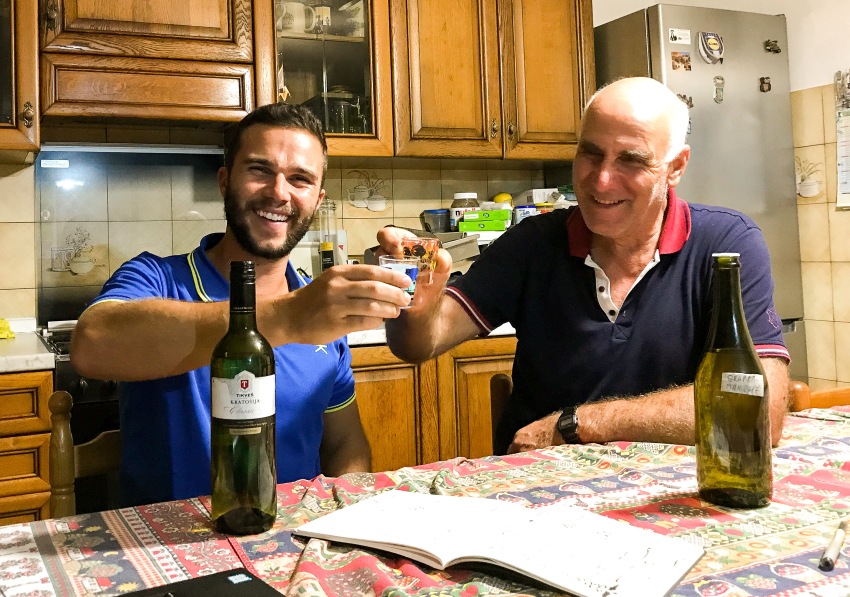