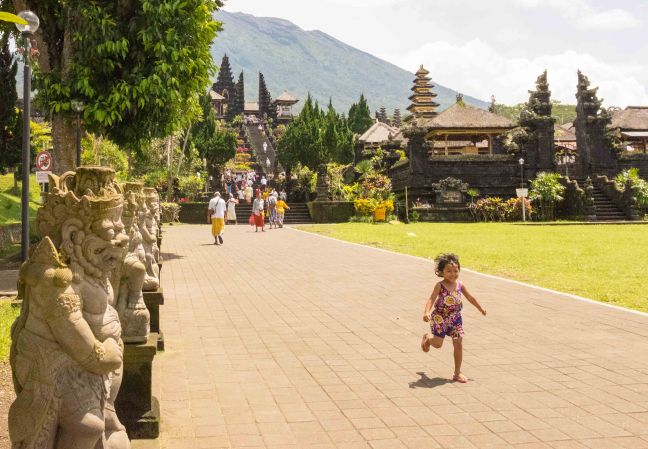 Exiting the cool, air-conditioned airport into tropical, moist, evening heat, and being assailed by hordes of people, most of whom ignore western standards of personal space while frantically shouting “Taxi! Taxi! You need taxi?!” drives home the realization: the four-month stage one of my world travels is over.  Stage two, Southeast Asia, has just begun.

“Huh, that’s odd,” I muse to myself while buzzing along the back roads of Bali on my rented scooter. “Why is everyone pulling over to the side?  It’s only a few raindrops.”

“Few raindrops” turn into “many raindrops,” and many raindrops turn into a torrential downpour.  Looking around, I realize everyone pulled over to dawn large, smartly made rain ponchos.  Everyone, of course, except me.

Naturally, I hadn’t bothered to bring my rain jacket. The fact that there wasn’t a single cloud in the sky an hour earlier when I embarked up my scooter adventure doesn’t matter.

The tropical heavens open their gates, and down comes the rain.  In less than a minute, I’m drenched.  Not just wet—soaked.  Through and through.  I’m wearing a t-shirt, long pants, and “waterproof boots” that aren’t so waterproof.

I consider pulling off to find shelter in some restaurant, to cower away from the onslaught of elements.

Instead, I start laughing.  I don’t know why, but it comes in deep, irrepressible belly chuckles.  And for a few whole minutes, I can’t stop laughing.

I’m laughing at myself—the silly foreigner, caught unawares by the totally routine, expected tropical rainstorm.  But I’m also laughing, in marvel and with a sudden third-person clarity, at this current moment in life.

I’m 27 years old, riding a rickety little scooter that I rented for the day from a man named Made for 50,000 Indonesian Rupees (that’s precisely three US dollars and 75 US cents).  I’m honking and weaving through traffic-ridden roads along with 100,000 other Indonesians, on the Island of Bali, almost ten thousand miles from the United States and western civilization.  My first reaction is to curse my rotten luck for getting caught in the rain, or for forgetting my rain jacket.  But then, I laugh long and deep, and keep on going.  There is nothing even remotely rotten about my luck.

The sun is bright, the countryside is beautiful, the traffic laws are nonexistent, and, with no particular plan in mind, I’m out on my rented scooter for a joy ride.

I keep passing temples as I buzz through small villages, so on a whim, I decide to pull over and explore one.  I find the temple locked, but, as I walk around, I see a group of five or six young children in a side alley across the street.  They’re all smiling good naturedly, and one of the bolder ones, maybe nine years old, calls out to me, and makes a “come here!” hand gesture.

Clothed in flip flops, short shorts, a bright orange t-shirt, and my tanned, but white skin, there’s no mistaking my foreign nature.  The children were probably just curious to see a tourist in their small village, miles away from the more popular attractions.

I pause for a nanosecond, and cross the street.  The children all scream and laugh and scatter.

Even though they’re speaking a foreign language, the reaction is clear:  Shit, he called the bluff!

Once I get to the middle of the alley, they all come back out of their hiding spots, bright smiles on their faces.  The passage is about six feet wide, with grey cement temple walls rising well above our heads on either side.  I notice they’ve got a bamboo stick jammed between the walls, far above their heads but just about at my eye level.

I introduce myself, “Neek!” they shout, and soon they’re all jabbering, and showing me a makeshift ball, made of tape and plastic and whatever every crafty materials are at hand.  And then I understand: It’s a volleyball court!  And with that, the game is on.

The game is three versus three.  My two teammates, I soon learn, are named Dewa (“day-wa”) and Made (“maw-day”).  We high-five after every round, and I notice that Dewa, although only about four feet in height and perhaps eight years in age, can jump high and block spikes like a champ.  I call him “Big Dewa!” and the nickname sticks.  All of the other children chant “Big Dewa! Big Dewa!”

All this hubbub eventually attracts a throng of local village folk.  I look around and there are maybe 30 people nearby, standing, as if frozen mid-stride in their errands, goggling good-humoredly at this obviously foreign man shouting, high-fiving, and playing volleyball with the children.  A few older boys, who I guess were older brothers to some of the children, come over to take pictures.  Everyone is smiling.

After about 30 minutes of competitive volleyball, Made’s mother comes out and says something to him.  He pulls a long face, turns to me, and says, “Sorry, I have to go now.  Bye bye Neek.”   The other boys say “bye bye,” and as suddenly as it started, the game is over.

As I walk back to the street, there’s a group of even younger children, those who were too young to play in the game, but who are old enough to be all in giggles.  I say goodbye and they all shake my hand.  The youngest, maybe three years old, shakes my hand, bows, and then touches my hand to his forehead in a sign of respect.  The others laugh and jive him, but I give him a big smile and a high-five.

I walk down the street, and hop on my scooter, and look back.  I see the group of young children running along the temple wall, high up on the other side of the street, laughing and waving and shouting.

I laugh and shout back and wave, and drive around the corner.

Friend of a Friend:

Sometimes in life, Lady Luck shines down upon us.

She was shining particularly bright when I walked into Gallery Alon, a famous woodcarving establishment, and asked for Kadek.

Some months prior, a friend of mine, who lived in Bali for a number of months once upon a time, gave me a rundown of the place, complete with language suggestions, cultural insights, and contacts (very much appreciated, Tom!).  Tom had been close with a Mr. Alon senior, a master woodcarver and owner of Gallery Alon.  Mr. Alon senior has unfortunately since passed on, but his son, Kadek, continues to run the gallery.

Shaking hands with Kadek, the “friend of a friend” connection instantly and seamlessly snaps into place.  Within minutes the two of us are eating lunch, smiling and chatting animatedly.  Within the hour Kadek insists that I leave my hotel and stay at a guesthouse in the gallery–free of charge–for the remainder of my trip.  Furthermore, that night I am invited to Kadek’s home to meet and dine with his entire family.

Of course, I accept Kadek’s generous hospitality, and, over the next week, intersperse my solo explorations with family dinners, outings, and traditions.

Mr. Kadek’s kindness and generosity, which had obviously spread to his family and his staff, left an impression on my heart.

In addition to the woodcarving gallery, Kadek also runs an elementary school, which provides quality, reliable education for hundreds of children, many of whom have some sort of special difficulties.

Kadek’s seventeen year-old daughter, demonstrating a benevolence beyond her years, asked that, for her birthday, any money that would be spent on a gift should instead be given to people in need.

One morning, on a Sunday, I wake up at 6:00 AM to join Kadek and his children at the local morning market.  We walk among the crowded stalls while Kadek’s daughter gives bags of rice to many of the older, struggling women.

Many of the women look confused at first, and Kadek explains that no one had ever given them anything before, so the concept is novel.  Needless to say, confusion quickly evolved into delight and gratitude. 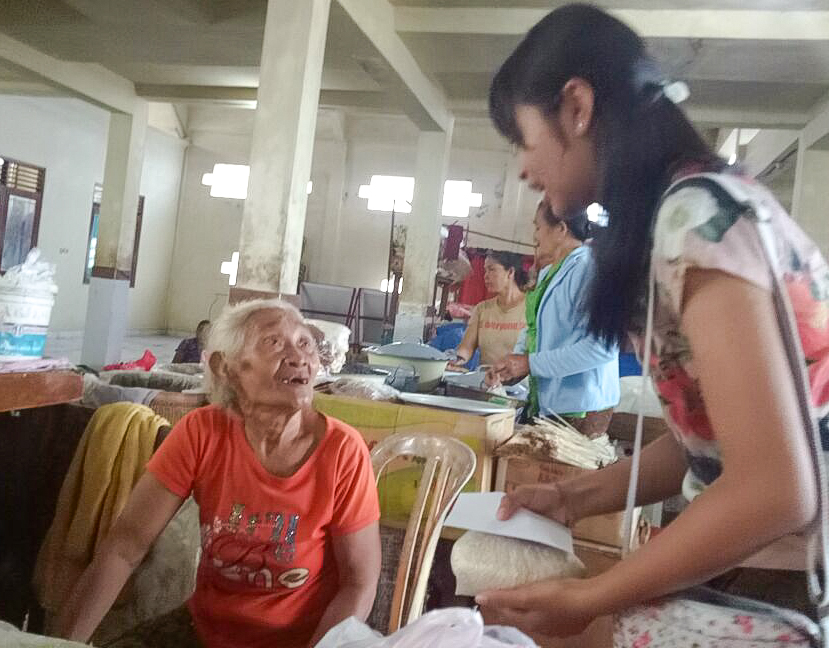 Next came visits and gifts to four different families, all poor and each with their own particular problem.  One little girl has a skin condition that no doctor was yet able to cure.  Another infant has hydrocephalus, a rare infection that prevents cerebral fluid from draining, which in turn causes massive swelling of the head.

The visits aren’t only to give money and food.  The entire family, Grandma, Grandpa, Mom, Dad, Auntie, Cousins, etc. all included, crowd into these different houses, and chat animatedly for an hour or so each.  The energy of the places, dour at first, turns bright, and worried faces light up with smiles.

Although everything proceeded in Indonesian or Balinese, Kadek goes out of his way to introduce, include, and translate for me.

I’ve found, there can be a certain awkwardness in charitable work.  Perhaps its a sense of guilt; being around those so much less fortunate than ourselves.  There’s also the delicacy of pride–how to help without hurting the pride the recipients, or indeed how to help without over-inflating one’s own pride.

But, this awkwardness was overwhelmingly assuaged by the smiles and gratitude all around.

One of the last visits is to a woman whose fourteen year-old daughter is very handicapped, both mentally and physically.  The woman is surprised but delighted by our visit, and the smile never leaves her face as she chats happily with everyone for the next 45 minutes.

I sit, quietly, not understanding any of the words said but absorbing the moments.  I watch the woman patiently and lovingly attend to her daughter.

When we finally leve, I put my hand on her shoulder, along with the shoulder of her daughter.

This woman, with so little in the world to be happy about, looks at me, and smiles.  She has the most warm, bright light in her eyes that I’ve ever seen.  The moment knocked the breath out of me.

I swear she was an angel.

The days went by quickly in Bali.  Two and a half weeks should have been two and a half months.  But alas, I had already booked my travel arrangements before entering the country, and before I knew it the time came to depart.

On my last morning, Kadek asked me to come to the school, located behind the woodcarving gallery, to take a some pictures with the students.  I had in mind a few haphazard photos with half a dozen students and perhaps one or two of the teachers.

Instead, the entire school congregated.

What’s more, Kadek told them the story of my world travels, and, after all the pictures were taken, each and every child lined up, shook my hand, and touched it to their forehead in sign of respect. 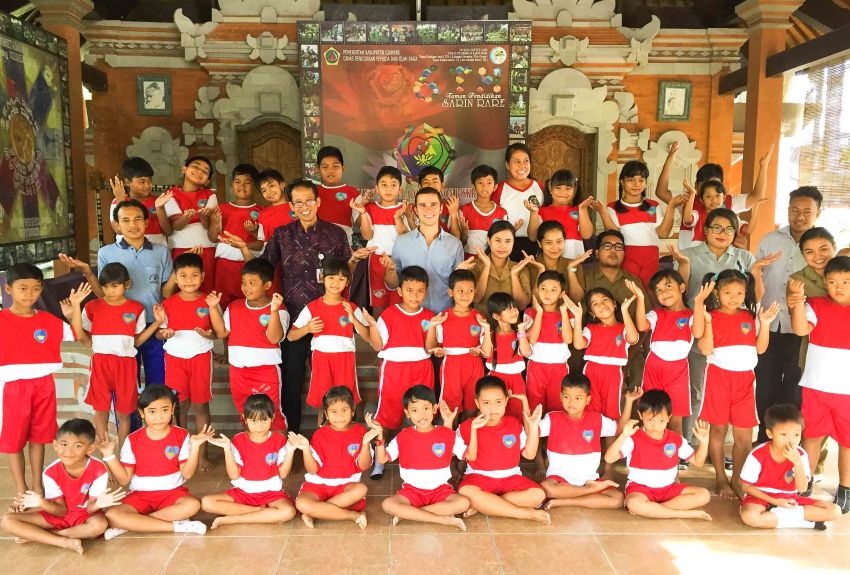 On the way to the airport, I stopped to mail a few packages, and needed to withdraw some money from an ATM.  My debit card worked, but the withdrawal was limited to an amount slightly less than I needed.  I tried a second transaction for the remaining 200,000 rupees (approximately $15 USD), but the ATM spit out my card and did nothing.

I shrugged, and walked away, in search of an ATM from a different bank.

A few moments later, an elderly man came shouting after me, holding up the two 100,000 rupee notes that the ATM had eventually spit out.

To me, the 200,000 was almost nothing.  A single meal or a few cups of coffee.  To this man, 200,000 rupees might be three full days wages.  Or breakfast, lunch, dinner and desert for an entire week.  And yet without a beat he returned it to a complete stranger.  With a big smile, I bowed in respect and thanked him.

He smiled, made a slight bow in return, and walked away.

Made, my Balinese friend who was with me, said:

“You see, Nick?  The old spirit is still alive.”