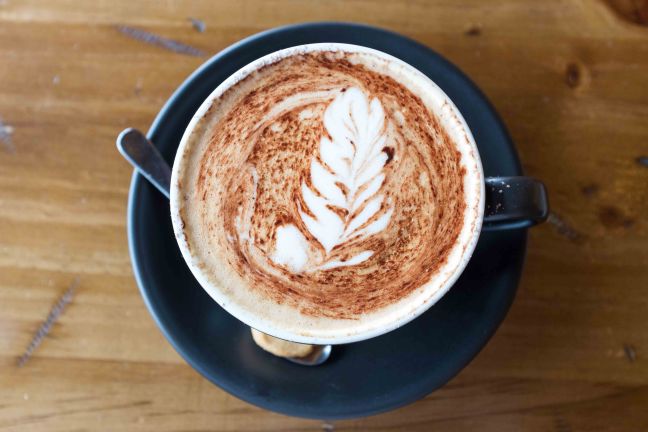 My brother-in-law Antonio likes to tell a story on me:

Antonio, who is Italian to the core, drinks espresso like a champ.  When I decided to go and study abroad in Italy for my junior year of college, he said “Nick, I’m so happy for you!  Let’s go have an espresso.”  I said thanks, but no, I don’t like that stuff.

Antonio said, “Nick, coffee in Italy is different than coffee in America.”  It is espresso-based, not drip-based.  “You drink 2 or 3 ounces instead of 20 or 30 ounces.”

“But, Nick, the coffee is part of the culture.  You don’t just drink it.  You go to the bar, you talk with your friends, you make friends, you enjoy the moments….”

Antonio was desperately trying to explain.

I dunno, dude.  Coffee is gross.

“Nick? Are you there? How are you? What are you doing?”

“Great!” I yell back into the phone.  “Can I call you back in five, though?  I’m at my favorite bar, drinking an espresso with my friends!”

Fast forward the better part of a decade, and I’m still a fan of espresso.

Australia, much like Europe, has an espresso culture of coffee.  I can appreciate good percolated coffee, but it’s not quite the same.  Therefore, these past weeks in Sydney and Melbourne, I made it a fun mission to hunt down the most hipster, divy, renowned and obscure espresso joints around.  At first, I found many via online reviews, yelps, and guide books.

However, after visiting the first few spots, a cool thing happened.  I spoke with the baristas, explaining that I came from America, was interested in Australian coffee, and appreciated fine espresso.  Once the baristas heard this, they snapped out of robot mode, and lit up.  They jumped into the intricacies of their coffee trade, such as the importance of heat, grinder quality, milk selection.  They spoke passionately about the nuances, the distinctions, the complexities of the espresso world.

One barista became so fired up that he literally shouted “Death before decaf!” and shook his fist when some poor soul next to me tried to order a decaf cappuccino.

Other unfortunate customers would stand patiently by, while I scribbled notes from distractedly excited baristas.  For fun, I took catalogue of Australian espresso culture.  The baristas, surprisingly happy to help iron out the nuances of my list, even referred me to other espresso joints.  Many of these guys work 5 or 6 days a week in a café, just to spend their day off drinking espresso in a different café.  “Lindsey at Elbow Room makes a mean flat white.  Just tell her Marek sent you.”

And thus, for fun, I came to create the following chart of Australian Espresso, and rated a few bars around Sydney as well: 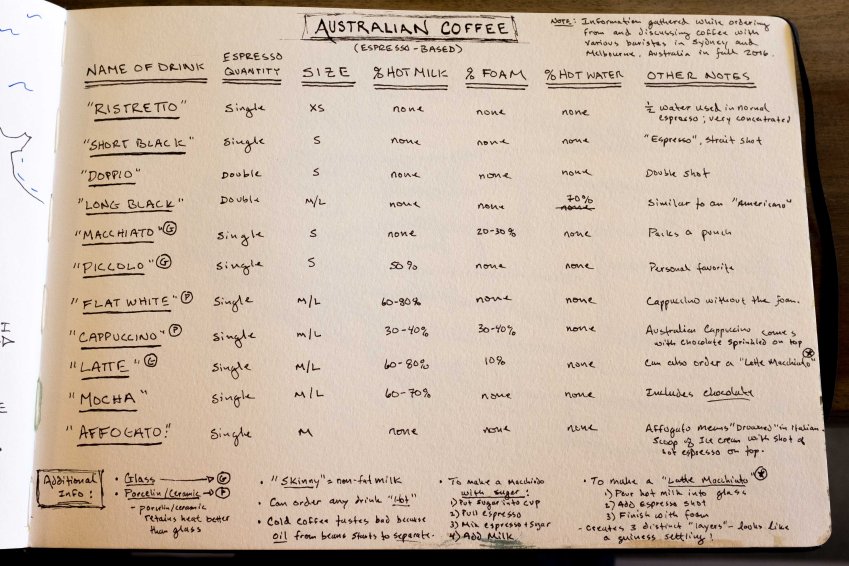 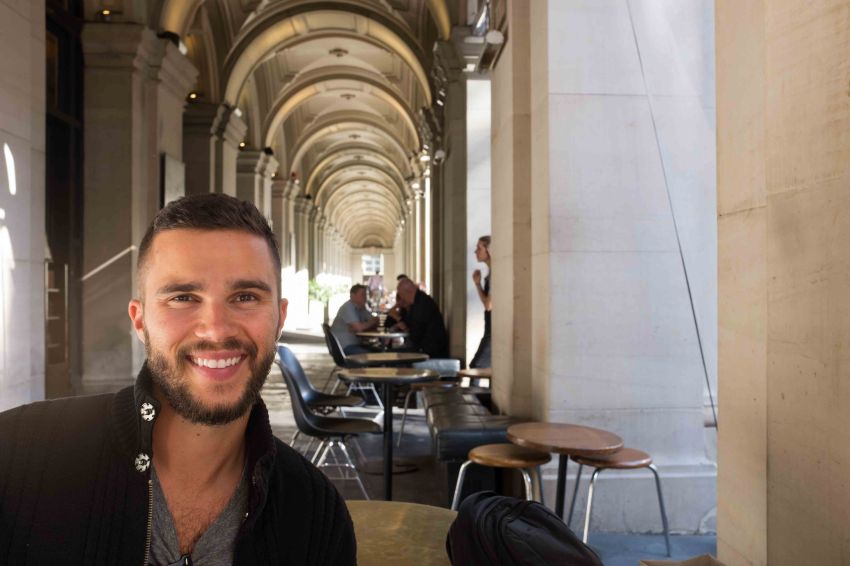 “Here are the keys.  Be careful if it rains, as the tires have seen better days.  And, remember to drive on the left-hand side of the road!”

I’m in Tasmania, and a new friend, Rob, has graciously offered me his car for the day.  Never mind that here, people drive on the left side of the road, the driver’s seat is on the right, the car is a manual (which means you shift with the left hand), and the terrain is hilly.  I got this.

Tasmania is the heart-shaped island on the south-eastern tip of Australia.  While the cities of Sydney and Melbourne have roughly five million inhabitants each, the entire island of Tasmania houses only 500,000 Australians, and is roughly the size of Ireland.  This sparse population makes for a relatively rural, mellow, and beautiful slice of the world.

The city of Hobart, in southern Tasmania, is picturesque as can be.  Situated on a large river inlet, the small, Santa Barbara-esque city boasts rolling hills, colorful houses stacked neatly along the water, friendly, down-to-earth people and an absolutely lovely old movie theater.  In recent times the city has received accolades for its raw natural beauty, its whisky distilleries, and the Museum of Old and New Art (MONA).  I spent almost a week exploring the peaceful town and surrounding areas.

One of my adventures included Rob’s car, which I decided to drive out to the end of the Tasman Peninsula to hike a spot called Cape Raoul.  Along the way I passed kangaroos, wallabies, Tasmanian devils, and saw accompanying “Beware of Tasmanian Devils!” signs every 5 kilometers or so.  Most of the highways have signs warning of kangaroos or wallabies as opposed to deer or horses.

The six-hour hike took me to the southern tip of the Tasman Peninsula, where ancient rock formations have shaped dramatic cliffs.  I was struck by diversity and stunning beauty of the nature.  The first hour of the hike took me uphill through an evergreen forest, ancient and happy.  Hour two led me along a 2,000 foot drop-off cliff of jagged rock formations.  Hour three led me through tall, heavy trees that swayed in the wind but let little light in below.  Hour four led me to the end of the peninsula, where the trees gave way to shrubbery and the shrubbery gave way to craggy rock formations that culminated at a jagged tip that felt like the end of the world.

If you had really, really good eyes you could maybe have seen Antarctica (or at least imagined it was there, beyond the vast ocean stretching out below).

“Nick, I need to run to the other stand.  Can you make the hot dogs for these customers, please?”

I take a deep breath, and step forward.

“Hi there, what can I help you with today, folks?”

I’m working, just for the day, in the VIP section of a hot dog stand at an MTV music festival in Wollongong, New South Wales, Australia.  Life leads us on strange, and oftentimes fun, paths.

I’d met a few friends of friends in Sydney, who were gracious enough to let me stay at their place for some days after flying back from Tasmania.  The friends had started up a hot dog stand company, Hanks Hot Dogs, which made its bread and butter by going to concerts, music festivals, and special events to sell American-style hot dogs.  The business, only six weeks into the venture, was already flourishing.

One of the guys helping with the stand, Billy, was an American chef who came to Australia four months before to work in various restaurants.  Billy and I, two yanks among a sea of Aussies, immediately took to each other.  We both enjoyed the outdoors, appreciated good food, and loved BBQ.  Since Billy had a few free weeks before heading back to the States in early December, and I had a few weeks before flying to New Zealand, we decided to join forces for a road trip up the east coast of Australia.

When Billy mentioned he had one last event to work before he could leave, and offered to bring me along to the MTV music festival, I thought, why not?

For most of the afternoon I did all the prep work for the dogs, slicing the buns, heating the bread, prepping the containers.  I watched Billy make dog after dog (the simplified festival menu only boasted three different types, the Texan, El Capitan, and the Old Faithful), and he knew I was watching.  Therefore, after 3 or 4 hours, when Billy had to run an errand he simply said “Nick, you mind making the dogs for a while?”

I looked up to the smiling, expectant line of people, and thought, I got this.

We ended up completely selling out, and got to enjoy the rest of the show from the VIP section.  We made friends with the beer stand next door, who shared their golden brew freely with fellow festival workers.  After the concert finished and we cleaned up, the brewery owner challenged us to a keg throwing contest over the empty, debris-laden festival field.  He invited us to drink at his brewing company, and after a few friendly, hearty beers we headed back for the evening.

The next morning we collected our $20 per hour wage for working the previous day of fun, bought camping gear, and headed north towards the Sunshine Coast.