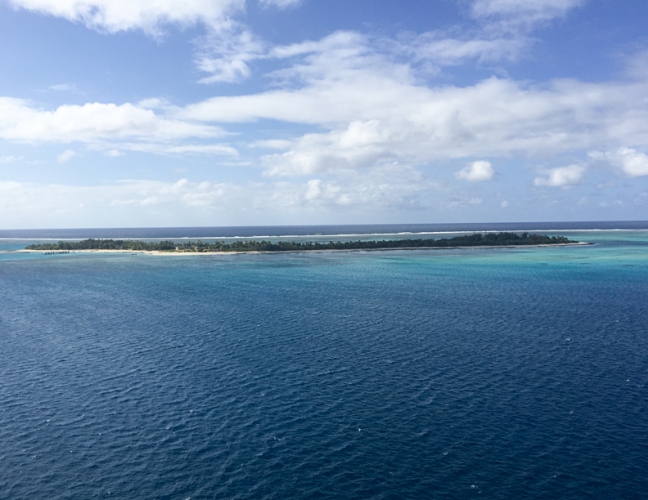 The first leg of my adventure: crossing the pacific via boat.  In this post, I’ll tell a few stories from the trans-pacific cruise, and include some pictures I took along the way.

The cruise went from Seattle, WA to Hawaii (Honolulu and Lahaina), then to Fiji, Vanuatu (Port Vila, and Mystery Island), New Caledonia, and finally Sydney, Australia.  The 24 day trip included 16 days at sea.  For the most part, the ship traveled day and night, around 20 knots per hour.  We traveled a total of 7,428 nautical miles.  Each day, the captain would give us an update, and discussed position, weather, activities, etc.  I especially enjoyed hearing the current ocean depth.  Most days, the depth would be between 6,000 and 16,000 feet.  3 miles, strait down.

What did I do?  I read.  I relaxed.  I exercised.  I slept.  I woke up before dawn to watch the sunrise, most mornings.  I tried to catch most sunsets too.  I explored a few foreign lands.  I met a few nice people, and recharged the batteries.  I had a lovely time. 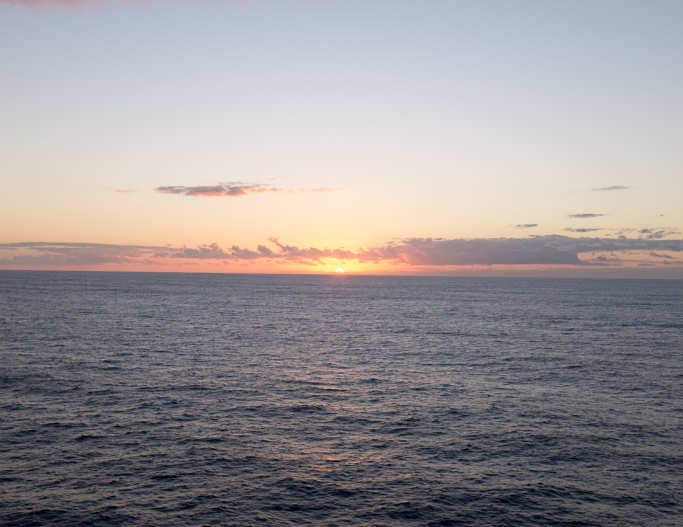 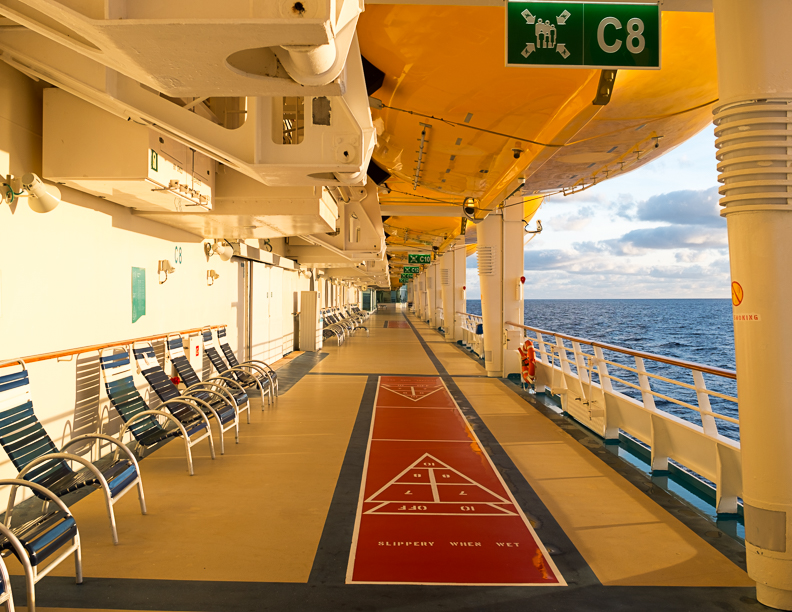 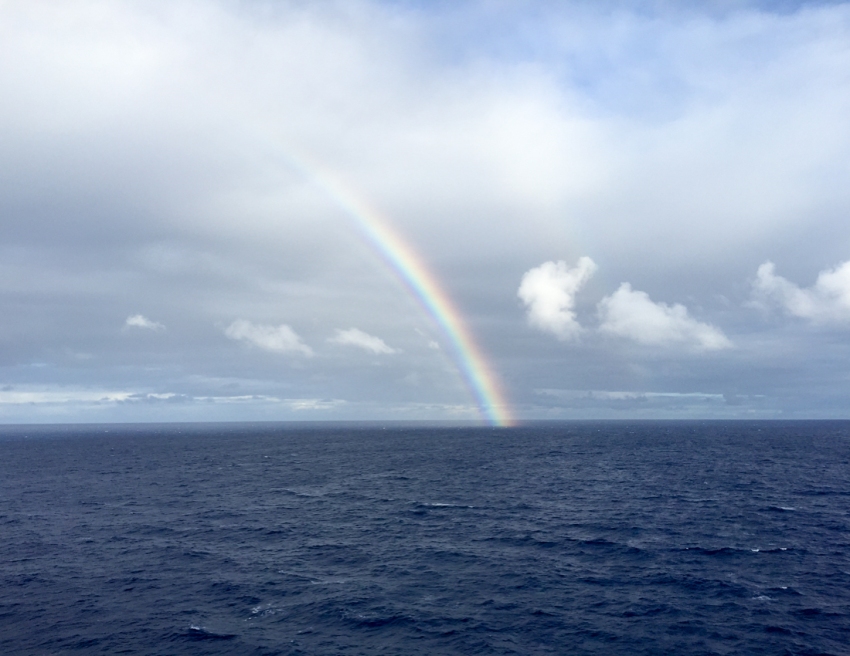 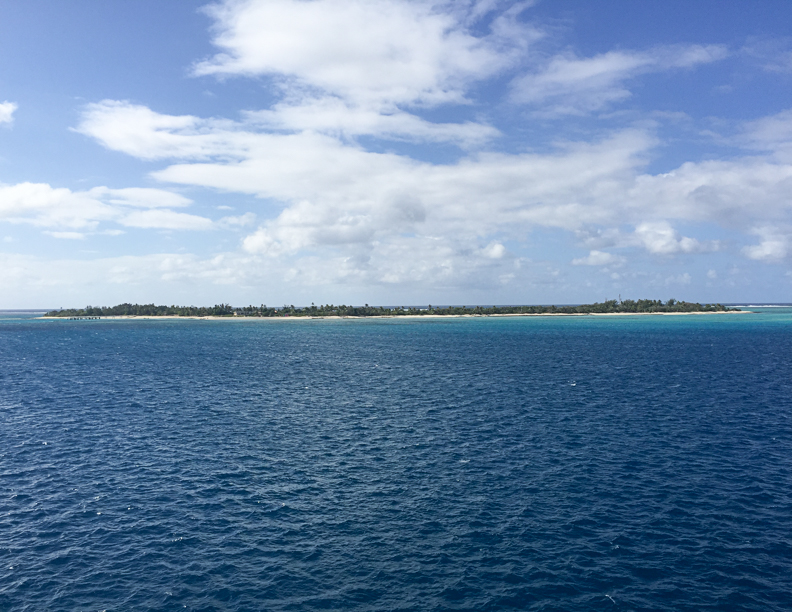 Just a six-hour stop on this lovely, deserted beach island in the middle of the South Pacific.  (Did I say deserted?  That does sound idyllic.  I meant almost deserted, except for a few locals and about 3,000 of my closest soft, round elderly Australian friends).  Despite the quantity of cruise folk, the spot is breath-taking, and big enough to share.

I brought a pair of fins and a snorkel, and quickly hopped into the ocean to feast my eyes on the local fish and corals.  Bright, colorful, energetic fish.  Regal, brain-like, untouched coral.  I dive down deep into the ocean, and feel the water change from warm to cool, from cold to shiver as I swim along the bottom.  I let the current carry me as I watch the light play on the sand below.  Now bright white, now sandy-white, now diminished, as clouds above lazily disperse the fury of the sun.

I comb the lovely white beach for sea-shells, pretty little physical glimpses into a different world.  I pick up a crab from the blinding beach and move him into the shade, where I can take glamour and action shots.  (The little guy gets his revenge—while shifting photographic positions, I scrape my foot painfully on a protruding tree root).  I buy a coconut, guzzle the juice, and sit happily on the sand, munching the delicious flesh, mixed with a few salty pieces of sand.  I speak with some local fishermen, and buy one of their crabs, caught off the shore.  I crack the crab open with a stick and stone, and enjoy every salty, briny bite.

I sit and watch a group of very young local children, free to play after singing their songs, do summer-salts down the sandy slope into the ocean.  Screaming and laughing and cajoling each-other, in a foreign language but familiar way.  Their clothes are tattered but they have bright, happy faces.  I smile and wave as I make my way back to the ship.  They scream and laugh and shyly look away. 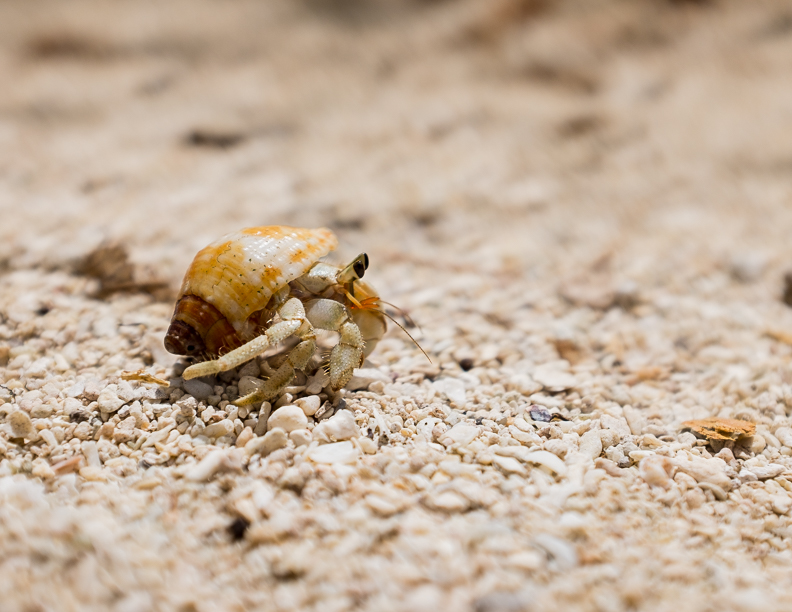 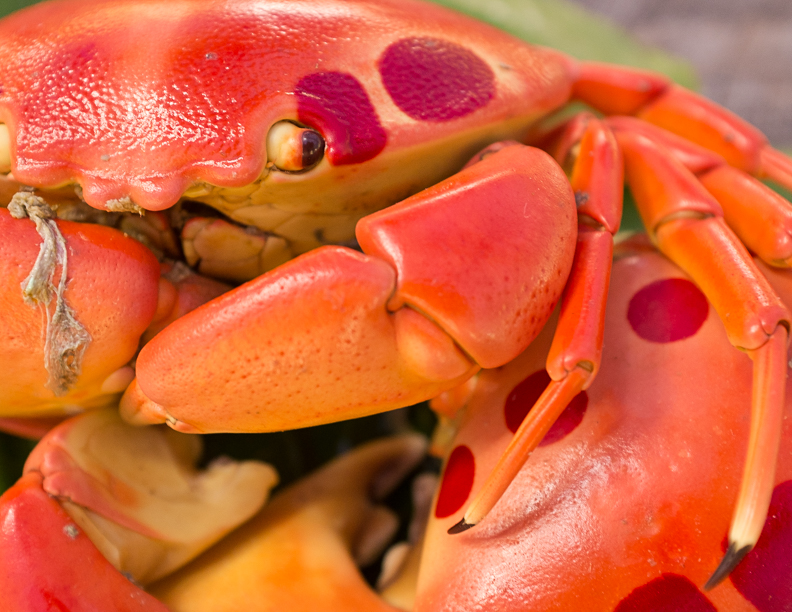 The young boy, wearing the characteristic white schoolboy shirt and navy blue Fijian skirt, accidentally brushes up against my arm in the bustle to cross the crowed, traffic-ridden street.  He looks up at me and I look down at him, both of us startled, curious of the other.  My white, bearded face and his dark, inquisitive features.  In an instant he decides he likes me.  His youthful face cracks from surprise into a nervous grin.  “Bula,” he says shyly, and I get the sudden impression that his mother, like all mothers, tells him not to speak with strangers, especially foreign ones.  “Bula,” I murmur the universal Fijian greeting with a smile.

We are half-way across a busy intersection.  The light to walk is still red, but that doesn’t matter because the whole crowd is crossing the street.   We walk with the safety in numbers.  “You hungry?”  I ask.  Without waiting for a pause, I hold out the remains of my lunch—a set of three sweet Hong Kong style dumplings, exotic, sweet, delicious; dessert for which my stomach had not saved room.  Against his mother’s better judgement, the boy takes the bag from my hand, and shoots me a furtive, thankful smile.  He has no idea what the bag contains, but accepts the gift without hesitation.  At that moment we reach the other side of the street.  I jostle left and he continues straight.  The whole interaction lasts maybe six seconds.  After a few steps I turn my head to the right, and look back.  The boy turns his head at the same time, and we both grin at each other for an instant before the crowds sweep us back into our own respective worlds.

I’m stretching in the Cruise Ship’s gym.  Within the gym there is a large, wood-floored and mirror-walled multipurpose room that is used for a plethora of activities.  I’m currently using one out-of-the-way corner to quietly stretch.

Next to me, there’s a fit looking couple doing intense abdominal exercises, nearly shouting at each other in their abdominal excitement.  To the other side, a girl with headphones does interval training against herself in the mirror at maximum velocity.  Now kicking, now lunging, now boxing and now push-up-ing.  Most intense of all, there’s a spin class going on in the other half of the room, about 8 people total, all led by an insane sounding German man blasting German techno music.  “JAAA, FASTER!  Increase by 2!  Faster!  Punch your legs!  Jaaa!  Let them feel de pain!”

I’m somewhat at a loss for words, marveling at all this action packed onto one multipurpose cruise-ship room when a 70-something year old gentleman sidles in, stands in an empty spot right in the middle of all this chaos, puts on a huge pair of over-ear headphones, closes his eyes tightly, and begins to shuffle—slowly—back and forth in unmistakable ballroom dance practice.

The intense couple shouts intense things at each other, the interval girl goes into a new set of extra-fast alternating lunges, the German spin captain literally screams over his techno for the pace to increase.  All the while the ship rocks back, and then forth, and the old man with his headphones quietly practices his waltz steps, headphones on and eyes tightly shut.

It’s a good ten minutes before I remember that I should probably alternate my pigeon pose.

Thanks for stopping by.  Until next time.